Revealing Brighton and Hove’s hidden past

A special ceremony was held in Brighton to commemorate the life of a freed child slave Thomas M.S. Highflyer

148 years after his death, a special service took place to honour Thomas M.S. Highflyer, an African boy rescued from a life of slavery. His true name will never be known as once aboard the HMS Highflyer, he was given an English Christian name befitting of a person rescued by Good English Christians.  He was named after the Captain and the ship that rescued him.

Thomas Malcolm Sabine in honour of Captain Malcolm Sabine Pasley and his surname became Highflyer after the Royal Naval Battleships that rescued him and over a 150 over slaves from a dhow in 1866 whilst patroling the East African coastline. 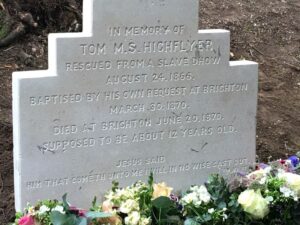 Other stories in the 19th century

Theme by Anders Noren — Up ↑